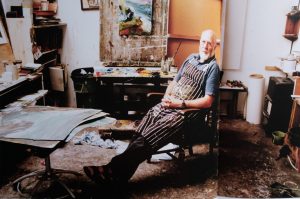 Peter in the Studio, Deiniolen and study for Twr Elin, Anglesey,2000. 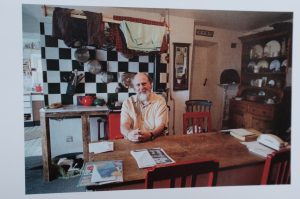 Peter in the Kitchen, Deiniolen with dog sleeping, 2000.

My first words to Peter Prendergast were ‘’Your from Mutton Tump’’ my wife in her childhood lived with her mother at the Windsor Hotel in High Street Abertridwr, only a local would know it was called that. Peters’ father an Irish Catholic had moved from County Wexford to work in the mines of the Aber Valley, he married a Welsh girl and settled in Abertridwr, where Peter and his twin brother  were born. Being a catholic and Irish was no way to be a child in South Wales, I can remember my own days at school when the Catholic boys had to stand in the washrooms during assembly. 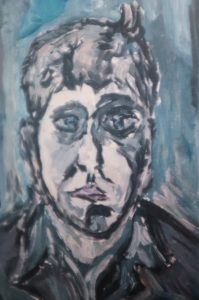 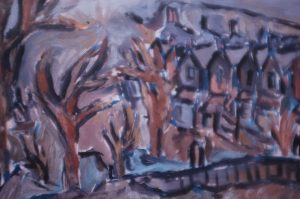 Back of High Street, Abertridwr, from Cwm Aber School, 1960, Powder paint on paper. 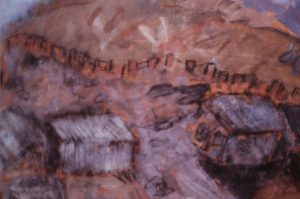 Unlike his brother Peter failed his eleven plus, and it was only his obsession with drawing and the help of Cwm Aber Secondary School’s outstanding art teacher Gomer Lewis, who encouraged and introduced him to the impressionists and modernist artists. His ‘Self-Portrait at Twelve’ 1958 started a life long interest in figurative and self portraits, and as did ‘ Back of High  Street, Abertridwr’ 1960 begin a carer of expressionist landscape painting. Head Boy, passing all of his leaving exams, he won a Glamorgan County Scholarship of £300 to attend the foundation course at Cardiff College of Art run by Joan Baker and in the second year with the help of Lesley Moore and his teacher Dick Whall and a packing case of finished paintings applied to ‘The Slade’ in London, not an easy task in 1960, where Frank Auerbach was his painting tutor. 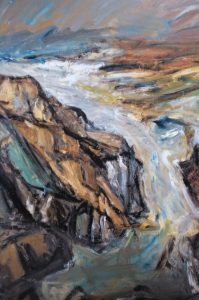 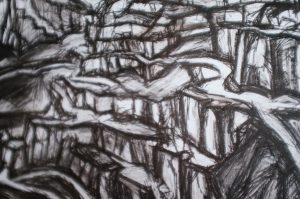 In 1967 the last year at the Slade Peter met and Married his wife Lesley. He left The Slade to complete a two years Masters Degree at Reading University, resisting the advice of Terry Frost  his teacher at Reading University, Peter decided to return to his home land. Not to the industrial valleys of South Wales but to the rugged mountains and slate quarries of Snowdonia, which he had hitchhiked through as a young man. They managed to buy a small stone cottage on a mountain side near the village and slate quarry of Bethesda. 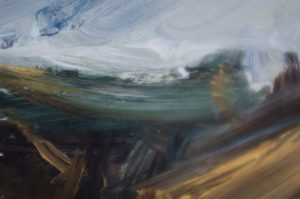 Landscape from studio, 1998, acrylic on paper

With a young family, several moves and little money, they eventually  bought a larger stone longhouse their final home. It was here that I first photographed Peter, his easel propped against a stone wall in the windswept garden overlooking a patchwork of fields, walls, isolated cottages, and the houses, chapels and steepled church of the village of Deiniolen and onwards to  the Menai Straits and Anglesey. As R.S. Thomas wrote in the poem ‘Welsh Landscape’.

‘ the thick ambush of shadows,

Hushed by the field’s corner

He had met his fellow landscape artist Sir Kyffin Williams, they had their own opinions on artistic style, particularly Kyffin, but they both had different ways of painting the landscape, palette knife or paint brush. Peter said that one day Kyffin arrived in his car with canvases and oil paints, gave them to Peter and drove off saying ‘’I’m sure you can make use of these’’, and into his car and he was gone.That is how I remember Kyffin, he was his own man and generous to a fault. 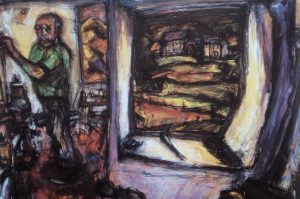 Self Portrait and Landscape, 2000, mixed media. 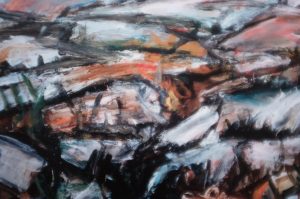 The last time that I travelled to Deiniolen, was completely different, Peter had built a studio in a stone outbuilding, on the terraces below the front of the cottage, a wooden door and small window over looking the view across the valley. Inside carefully positioned was a mirror into which Peter could see and paint himself and the landscape beyond and that is the picture.      ‘Self- Portrait and Landscape’ 2000, Mixed Media.

A small window dirty it

With their breathing, though sublime

And inexhaustible the view

I stayed overnight with Peter and Lesley, the dog asleep in his basket next to the kitchen range,  Peter sat around the table with matching red teapot and chairs and on the right the Welsh Dresser. In the morning we drove to the top of Anglesey, in a howling gale and torrential rain Peter dragged a trolley, with workmate, board, oil paints, brushes etc across the sodden heath to the cliff tops above Twr Elin, Rock Pool. The water crashed against the defiant ravine, boiling and churning as an undeterred artist fought against the elements. Later these working studies would be used to make large scale paintings in the studio. No Monet mill pond this but a true – Prendergast  expressionist seascape. The Power of Peters landscapes from the Slate Quarry, Bethesda to West 53rd Street, New York is proof of his dogged determination through all adversity. 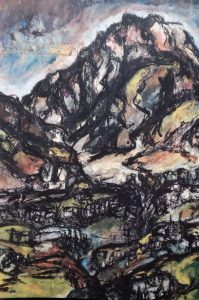 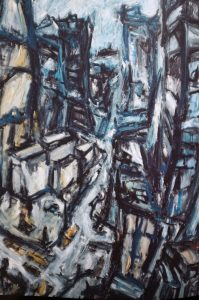 On our way back to Deiniolin as I had planned we stopped to visit Kyffin, they talked for an hour or so,  before saying our last farewell, I took the photograph of the two great Welsh landscape painters.