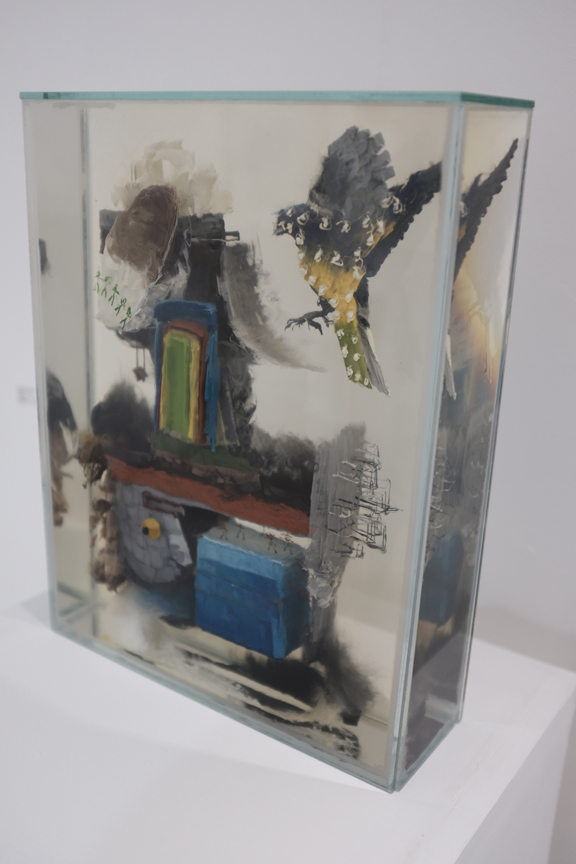 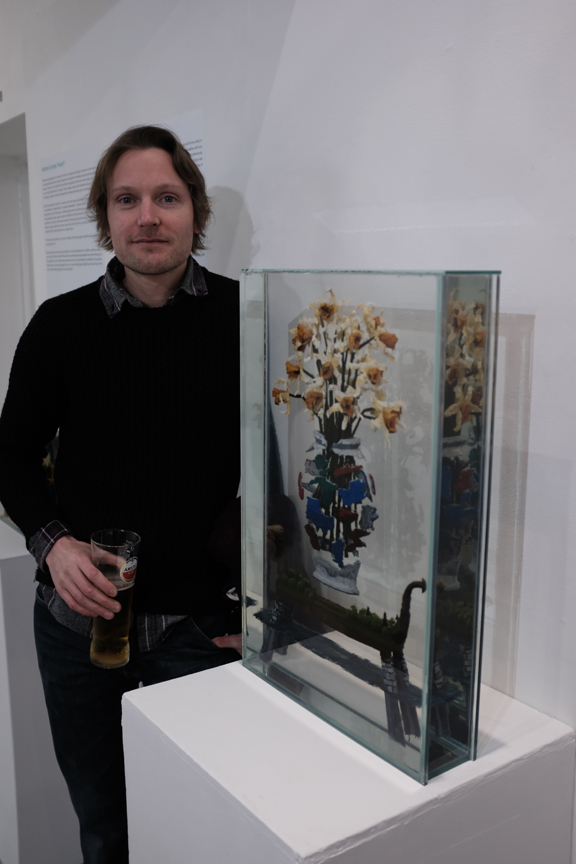 Arron’s developing medium of Sculptural Painting allows the creation of three-dimensional forms solely in oil paint, freeing paint from surface and gravity whilst retaining the fundamental painterly qualities with true weight granted to colour. It can have physical form, shape, texture, and colour whilst remaining simultaneously suspended and animated with a sculptural zeal that vastly surpasses the remit of impasto. Whilst using a raw palette, colour seems subject to a near Newtonian quality of interaction and meaning becomes a function of parallax.

Arron’s second solo show Paint³ aims to question the nature of oil paint in this new dimension, and explore its subsequent identities and abilities, to further the understanding of this new medium and its discourse within the gallery context. Best understood by being viewed as sculpture, and appreciated as painting, the works featured require the viewer to explore impossible physicality’s through “visual touch.” The work becomes almost non-local, a painterly dimension of sticky physics where motifs can be elevated or hidden depending on the point of observation in time and space. Marks can be loosely fluid or intensely precise and meaning can be coldly rational or viscerally surreal.

Arron Kuiper is a Welsh born artist best known for his invention of a unique medium he terms “Sculptural Painting.” His work has earned multiple national awards, has been widely shown across the U.K., and has also featured in numerous national and international publications. He continues to practice in North Wales and was the Friend of the Glynn Vivian award winner at the 2020 Beep Painting Prize.

Tess Gray – You look fine though 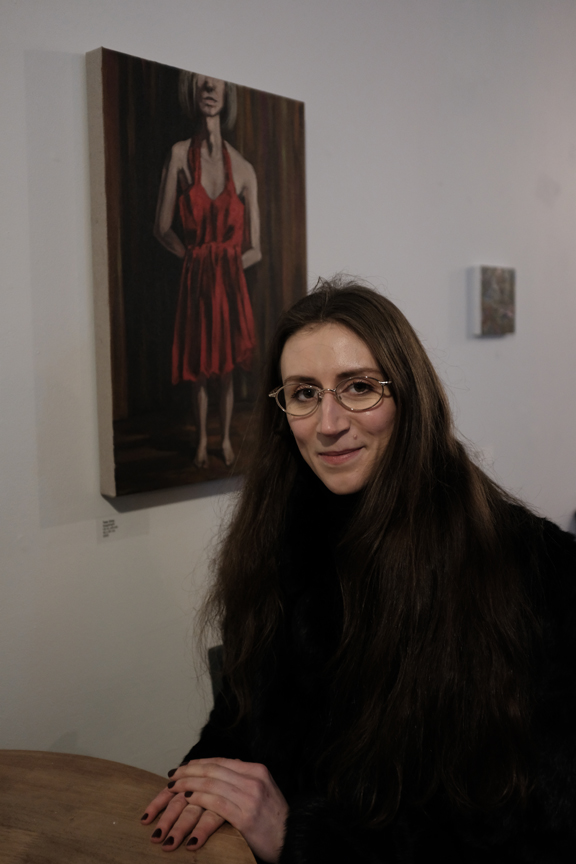 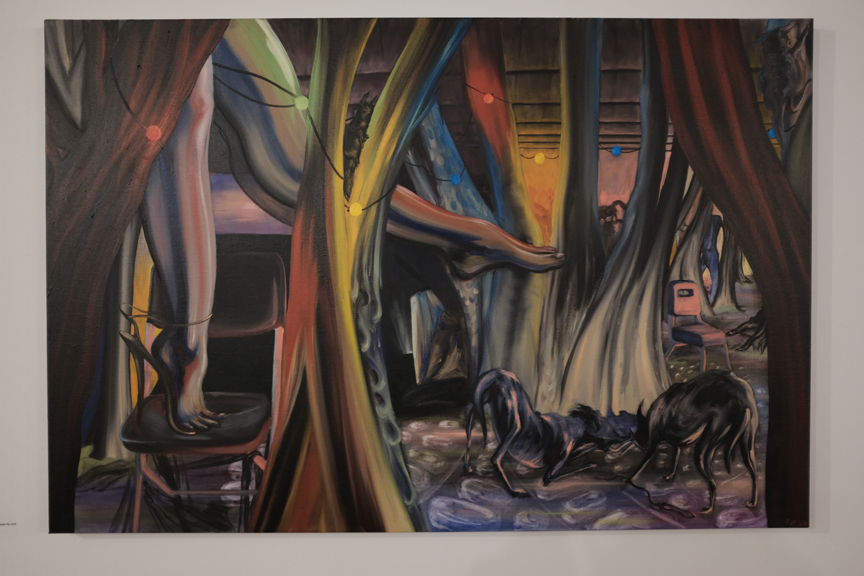 Cardiff based artist Tess Gray presents a new body of work ‘making visible, hidden stories’, looking at female neurodiverse experience and overlaps between identity, mental health and gender. Landscape remains an influence in this work but takes on a more theatrical role to illuminate the narrative of the characters that inhabit them. Chaos and rigid practices live together harmoniously with stillness while misconceptions, expectations and assumptions come up against obscured perspectives.

These abstracted observations may appear nonsensical, as though there is a puzzle to be completed, but they are only stories and stories that mystify don’t necessarily need to be solved to be understood.

Tess Gray graduated from Winchester School of Art in 2012 and is now based at Kings Road Studios, Cardiff. She was Artist in residence with Aamir Art House, Goa in 2018. Following this her painting Bacterium Stroll made during the residency was selected as a finalist in the 2019 Jacksons painting prize.

In 2020 the painting Bacteria Gathered at Avebury was shortlisted for the Beep Painting Biennale at elysium gallery and was voted by the visitors to the exhibition as the people’s prize winner.

Rosalind Faram – No More Stuck Inside 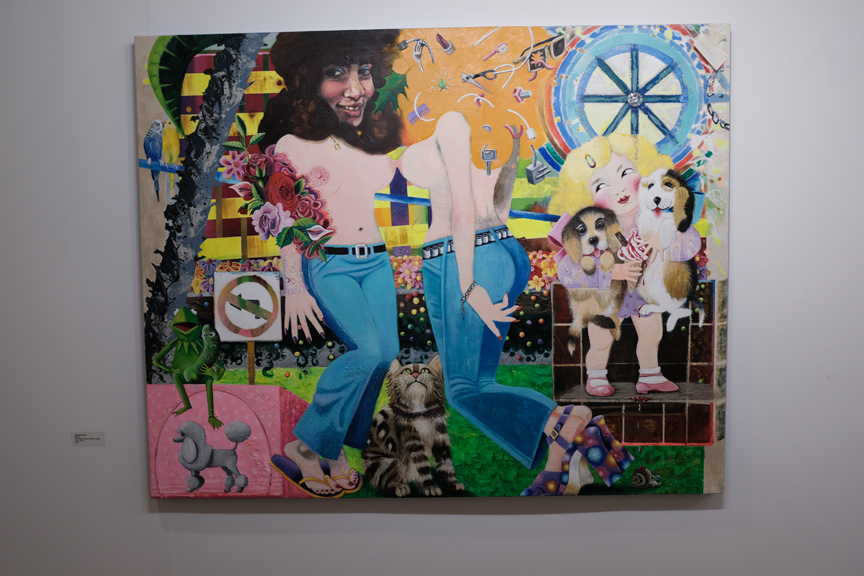 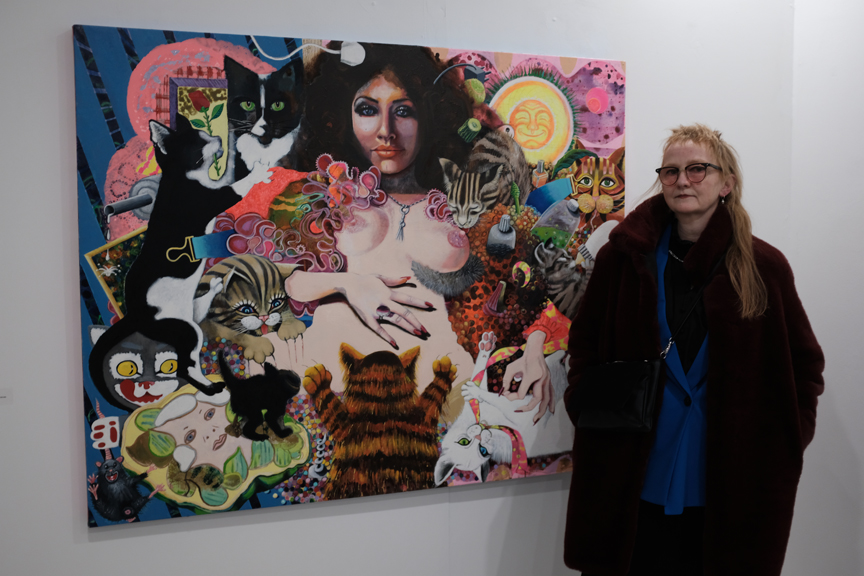 The imagery that lives and fully inhabits the painted world of Rosalind Faram is a close-knit community of characters and associates that exist due to, but also in opposition to the world that surrounds them. Their intensity of colour and energy, a way of kicking back at the COVID realities that have accompanied their painting into existence.

‘No More Stuck Inside’ alludes to the courage to truly attempt to live fully, even if it is via the handling of a brush and the wonders that can transpire via the considered application of it. The overt sexuality and otherworldliness that we see, acting as a respite and temporary solution to the masked segregation that we are surrounded by physically and mentally, the creative act, a perfect tool to remain truly alive and responsive to what our imaginations can conjure up and piece together.

Rosalind’s paintings are potent and demanding of the viewer, pulling them in closer so that the enquiring eyes deeply see each addition that builds and surely assembles, the longer you are in the company of each otherworldly manifestation.

The confidence that Rosalind shows in allowing a truly potent and no holds barred expression to be first thought, then slowly and surely manipulated with pigment, gives me hope for the spirit of rebelliousness, honesty and sheer driven confidence in contemporary painting.

Her vivid universe is a space and place that refuses the rules of reality, that truly believes that more and more can be slotted and slid in, until it all explodes out to our receptive gaze. The joyful challenge to take it all in, to become part of the energized scene, a vindication of the power and presence that can be conjured when an enquiring mind discovers an escape and sanitiser for the hard facts of today’s turbulent world. 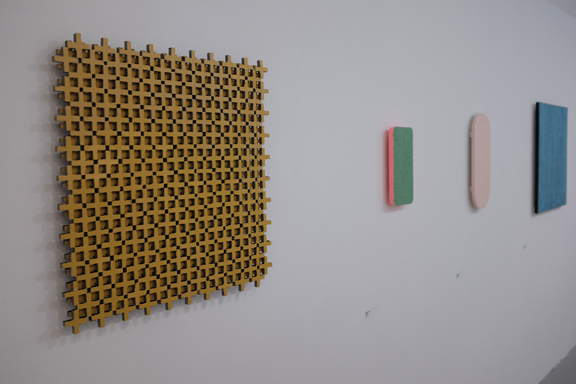 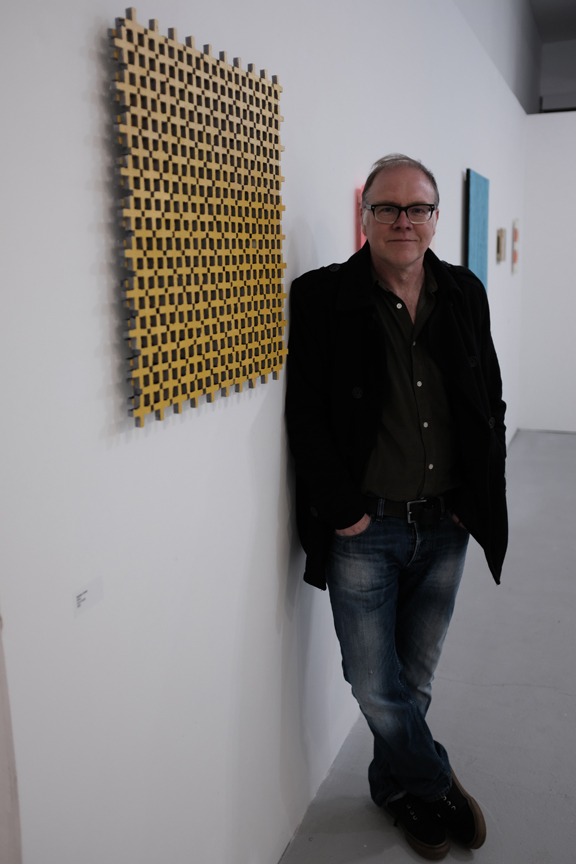 All works play with what it means to produce something, some kind of meaning, from nothing – the idea of producing a contrivance which celebrates the making of that contrivance and the subsequent pleasure that brings – how pleasure works, the meaning of pleasure and the pleasure of meaning.

Using an economy of means, pieces aim for a directness and apparent simplicity to achieve an emotional resonance. Deliberately adopting unprepossessing elements, pieces originate using simple geometric configurations or forms dictated by proportional divisions. Mainly using oil paint on display board, pieces are constructed in a workmanlike manner, with a conscious avoidance of nuanced, expressive brushwork or any potential dramatic tension arising from a theatrical juxtaposing of dissimilar elements within the same piece. This non-hierarchical conception inevitably resulting in pieces featuring symmetry or repetition.

The process of making, itself plays an essential role in how a piece evolves, whereby the traces of direct human involvement are always apparent in what might otherwise appear as a clinically conceived endeavour. The works shuttle between the bespoke and the ubiquitous, playing with the idea of being a thing, whilst implicitly celebrating its own artificiality. This highlighting of a piece’s mechanics, rather than being an add on rustic feature, being an essential element in its final meaning.

Whilst acknowledging their relation to the narrative of what constitutes a painting and its histories, the works also seek to ally themselves with the associative and emotional attachments we make with everyday objects in the world.

The obsession with how abstract elements achieve any sense of emotional resonance or meaning, has resulted in pieces featuring formats designed to produce a clear, solvable “result” or “answer”, such as puzzles, yet perversely presenting them solely as formal patterns, voiding their inherent purpose, to highlight the vagaries of what constitutes the idea of formal meaning.

The works aspire to a sense of intimacy and stillness where the ease with which the overall image is  instantly “read”, allows a space where the painting can unwrap itself and the contribution of its constituent parts can be reflected upon – where clarity alternates with ambiguity, evidence with mystery, reassurance with revelation, continuity with disruption, repetition with variation, surface with edges, control with lack of control, prescription with looseness.

Whereas previous works have been on a modest scale, some of the current piece’s work with the idea of being physically larger yet still retaining the same intimacy as smaller works. To this end the larger pieces, rather than being “scaled up” versions of smaller works, explore the idea of combining a large number of repetitive, small elements without the piece being read as overly complicated whilst avoiding any sense of bombast or swagger.     January 2022

Graham Jones is a London born; Cardiff based artist who was the recipient of the Gallery Ten/Andre Stitt Award at the 2020 Beep Painting Prize.