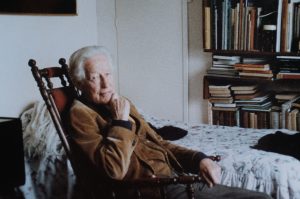 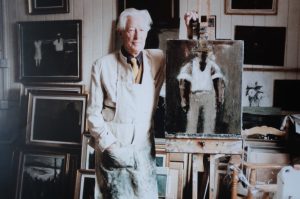 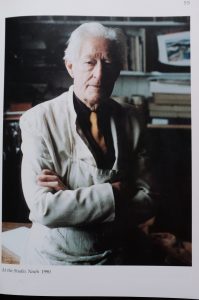 Following on from my conversations with Kyffin Williams I visited Will Roberts for the first time in 1990. Will had been working with his partner Wilfred Kaltenbach in their grandfather clock and jewellery repair shop in Angel St, Neath. Will met Josef Herman outside the local cinema and became a friend and pupil the Polish artist who lived above the Penybont Inn in Ystradgynlais,.

It was Josef, Will said, ‘You are far too good an artist, give up mending clocks and just paint.’ 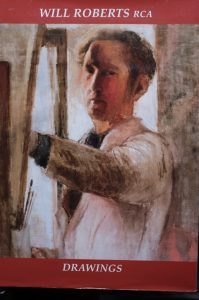 Kyffin Williams wrote in Will Roberts book ‘Drawings’ published by the National Library of Wales on his the gift to the people of Wales of 600 drawings, sketch books and copies of his work in 2001 after his death in 2000 about how Will had been accused of painting in the style of Josef Herman.

‘The work of Will Roberts is often compared unfavourably with that of his friend Josef Herman, but this has always been a facile and insensitive appraisal, for even if there are technical similarities, the mood and message of the two artists are entirely different. Whereas Josef Herman dedicated himself to the painting of mankind in a powerful manner that owes much to the influence of Constant Permeke, the work of Will Roberts is more specific and shows the individuality of human beings’. 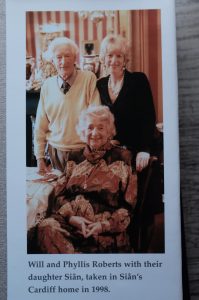 Tony Curtis, professor of Poetry and writer on the Arts in Wales, wrote two books of interviews  with artists, ‘Welsh Painters Talking’ and ‘Welsh Artists Talking’ for each book I travelled separately to photograph the artists. The books were launched at the National Museum of Wales in Cardiff with an exhibition of the Portraits and work of the artists, in the first volume was the interview with Will. I decided to ask each of the artists to sign my book underneath their portrait, the only artist missing on the evening was Will. So I telephoned him to ask if I could call in for the signature. Reluctantly his wife said that they were going to be celebrating their golden wedding with a family party at their daughters house in Cardiff. Undeterred I travelled from Oswestry where we lived to Cardiff, only to glad to be away from the gathering, Will said,  ‘Come in the backroom, I’ll sign your book.’ I took the family golden wedding picture, Will, Phyllis and daughter Sian. In return I received in the post a chalk drawing of Miners cottages in Onllwyn in the Dulais Valley 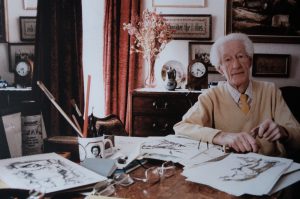 I photographed Will again 1998, back home in Billton Road, he had been in hospital after having had a stroke, while there he drew the nurses and back at home was drawing self portraits repeating them over and over, may be an attempt to get back to painting fitness. 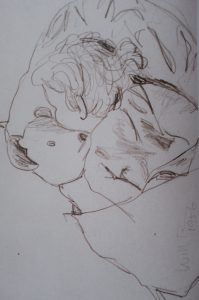 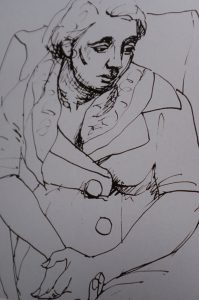 Sian wrote in the book of Drawings, some lovely words that echoed my memories of Will.

Will Roberts – quiet, unassuming, a true gentleman- was nonetheless, a man of great Charisma, possessing that extraordinary ability that some people have for making the individual feel completely at ease in his company and that they were at once important and special to him.