After working  as a newspaper photographer for some thirty years and returning to live in Wales I started again photographing, with the support of The National Library of Wales, the Artists and Writers of Wales. Sir Kyffin Williams was first. I asked him for a list of six people that I should record for posterity, top of his list was Will Roberts of Neath,  ‘ THE BEST PAINTER IN SOUTH WALES, ‘ he said. Top of Will’s list was John Petts, ‘SEE HIM SOON,’ was his reply. I photographed Petts in 1997 pictured here working on a stained glass window for a church in his studio in The Old Workhouse in Abergavenny. 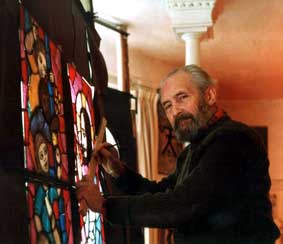 A strange choice I thought, but top of Will Roberts list of artists was John Petts better known as a Wood Engraver and Stained Glass Artist,  ‘’go  and photograph him now!’’  Will said. 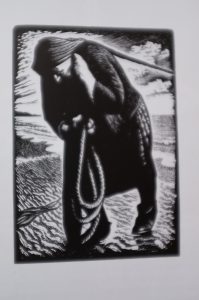 I went to Abergavenny where John Petts was living in The Old Workhouse, an ideal building for a Stained Glass and Wood engraving Studio with his third wife Anna Brignell, the upper floor converted into modern living accommodation. If any artist needs a biography John Petts is one, he was at the heart of the new wave of contemporary 20th Century  Welsh Art (1930-1901). This was an important piece of information, and Will knew it. Before twelve months had passed John Petts was dead. 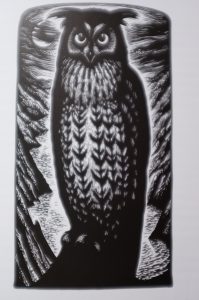 John Petts was born in Hornsey in 1914, he studied for one year, drawing at the Hornsey College of Art, and three years under the Engraver Norman James from here he went to the Royal Academy Schools, where he met his first wife Brenda Chamberlain and was married in 1935. 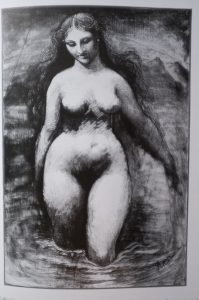 They decided not to stay in London but follow their dream of a idyllic and romantic life in a cottage at Llanllechid, North Wales. Life, however was not easy and to survive John engraved cards which were hand coloured by  Brenda, a rare item today. After a few years the relationship ended, and Brenda moved to Bardsey Island, for fifteen years, then Hydra, Greece before returning to live in Bangor, where she died of an overdose of barbiturates in 1971. The coroners verdict accidental death. 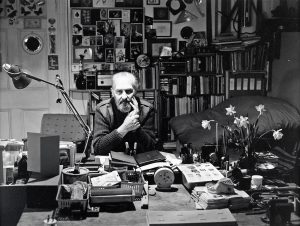 John and Brenda were divorced in 1947, and in 1948. John moved to Llanystumdwy to the home of Lloyd George to restart the Caseg Press with Jonah Jones also 1948 he married Kusha, christened Margery Miller an artist and writer studying at Reading University. John then worked for the Welsh Arts Council in Cardiff before being appointed lecturer in Design and Crafts including stained glass at Carmarthen Art College. Self taught, he had no experience of stained glass and travelled to Swansea where he took advice from Howard Martin at Celtic glass, whose work mainly involved traditional  ecclesiastical windows, his first commission was for the Llandaff Diocese. Much to the surprise of Celtic glass. 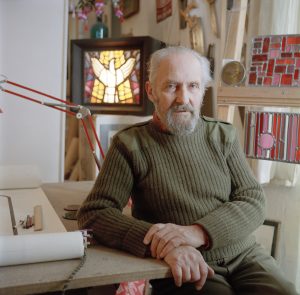 John and Kusha had moved to Llansteffan, where he set up a stained glass studio with Kusha as workshop assistant while still painting.  They divorced in 1984 and John married Anna Brignell in 1985 and moved to the Workhouse in Abergavenny where he passed away in 1991. John Petts was one of the three leading Wood Engravers of The British School along with Eric Gill and Gertrude Hermes.