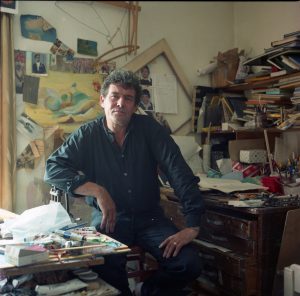 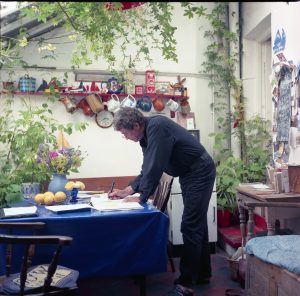 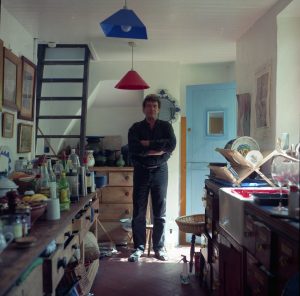 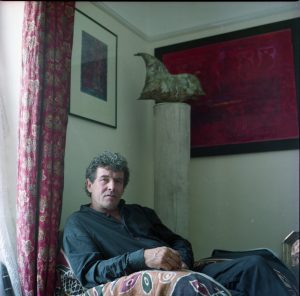 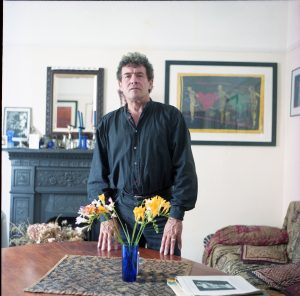 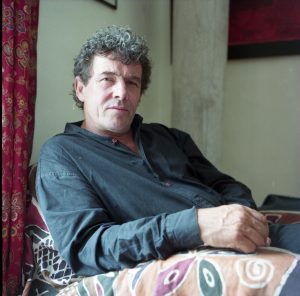 My first encounter with Osi Rhys Osmond was at The National Library of Wales in Aberystwyth, the Art Historian Paul Joyner who had been involved in the Libraries acquisition of a major collection of Josef Herman’s drawings, was addressing a seminar on the Polish refugee artist  who had settled in Ystradgynlais in the Swansea valley, after escaping from the German pogrom. Osi stood up at the end of the session and produced the most provocative and challenging statement, the audience  sat in stunned silence and I think the speaker wished he could melt away. At the lunch break, I asked Osi if I could visit him, I was curious, who was this man? What makes him speak with such passion. 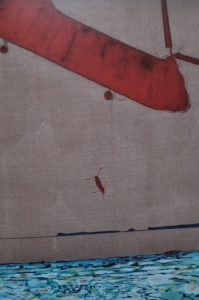 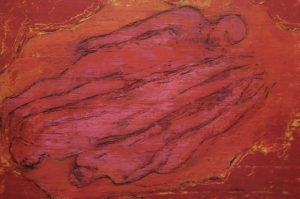 In Evidence, oil on paper

I met Osi at his home in Llansteffan. Opposite his house was The Pound, a round building in the village centre, where he had his studio, I photographed him there and spent the rest of the day talking, I could have spent two. I can only say that never had I heard a man speak with such passion and pride in the people and landscape and cultural heritage of our country. 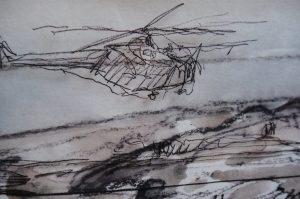 Osi Rhys Osmond, Donald Malcolm Osmond (He was named Osi by his friends at art school) was born in Bristol in 1942 and moved when he was three with his family to the mining village of Wattsville in the Sirhowy Valley both his father and grandfather were miners, his father was also a Baptist lay-preacher. From an early age he had an interest in drawing, at the local grammar school he had already held exhibitions. In 1959 like many well known valley artists he went on the train to the Newport school of Art under Thomas Rathmell, with a further year in Cardiff College of Art. After college he stayed in Newport for about five years before travelling west to take the post of Head of Art at Narberth Secondary School in Pembrokeshire, In 1988 he went to Carmarthen College of Art, teaching on the Foundation course, and Swansea School of Art in 1996 till 2012. 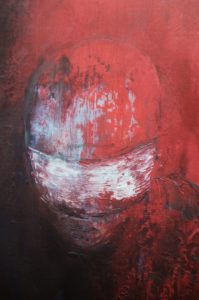 Osi was a man of conviction, a proud and loyal Welshman who once seen is never forgotten. His role in life was to promote the Art and Culture of Wales, with his powerful and often provocative style his statements could put the fear of a Welsh Baptist preacher or the Anglican minister like R.S. Thomas through his teaching, artwork and writing. 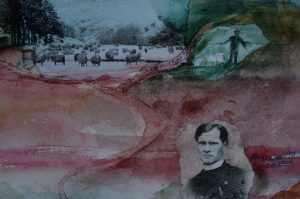 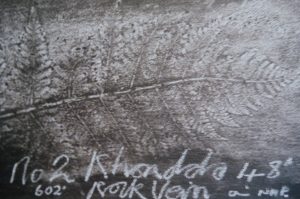 It was at this period around 1999 that I was photographing Welsh Artists and Writers for Planet Magazine, Shelagh Hourahane, writer, artist and Art Historian was writing a profile of Osi Rhys Osmond.( Planet 136. Aug/Sept 1999) I decided to revisit Osi and spent a long time photographing him in nearly every room in the house, which was a series of unique work and living spaces created by his wife Hilary and himself. 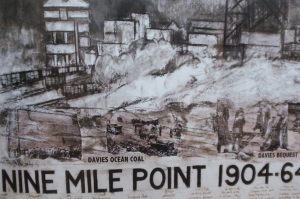 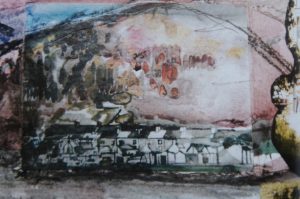 At the same time Osi was also writing for Planet Magazine, and in the following  edition of Planet (Planet 137. Oct/Nov 1999) he wrote the most moving and amazing article ‘ Cultural Alzheimer’s’, Osi Rhys Osmond on memory and society in post-industrial Wales. The story of his Father’s onset of Alzheimer’s disease and returning home to the changing village of his childhood.  So moving and powerful, that I had to write and tell him my thoughts. 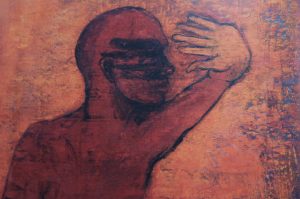 He marched for the Miners Strike, joined CND, and stood as a socialist, to be a Plaid Cymru County Councilor and was elected to the Gorsedd y Beirdd in 2006, exhibited worldwide, wrote and published and broadcast the culture of Wales with enthusiastic pride.

My last entry on my Archive, was photographs of the Josef Herman Exhibition and Auction at Ystradgynlais Welfare Hall of work donated by Josef’s widow Nini, to raise funds for the Josef Herman Education Foundation for school children in 2007. Osi was in the Chair and held the gavel. 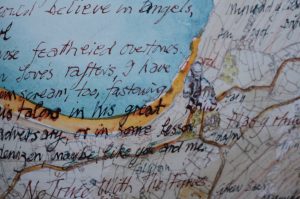 Themes that echo Osi’s concern for the future of Wales and mankind. in the works that I have picked to illustrate this article wattville and Cultural Alzeimers, pacifism and war, Palastine and Sudan ,Manafon.  The R.S. Thomas Series and Llansteffan, Operation Cast Lead, and Helicopter are a small selection from ‘Encounters with Osi, with the kind permission of Hilary Rhys Osmond.

A not to be missed book, a tribute from his friends and fellow Welshmen. Encounters With Osi, The H’mm Foundation, 2015.