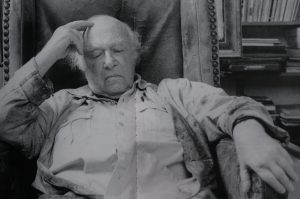 ‘Your no stranger here,’ I was told the very day that I arrived. A day later I was addressed  as Joe and now I am nick-named Joe- bach.’’ These are Josef’s own words taken from his diary.

The people of Ystradgynlais had given this Polish Refugee Artist a home and a welcome that would stay with him for the rest of his life. He came for two weeks and stayed for eleven years, and produced in this time his iconic, bold and sculptural images of the miner. 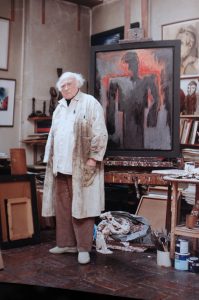 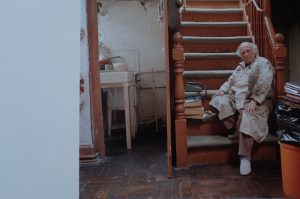 Josef was born in 1911 and attended the Warsaw School of Art and Decoration, after eighteen months he left to work as a graphic artist. After one exhibition in Warsaw, he left to escape the Nazi Pogram which claimed the rest of his family in 1938 for Brussels, France and Glasgow in 1940. Persuaded by a friend he arrived in Ystradgynlais in 1944. 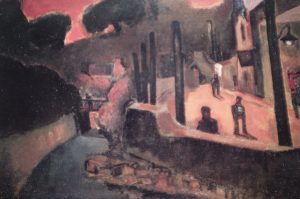 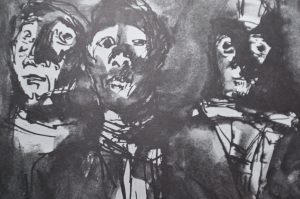 After gifting the Photographs of the friends of Dylan Thomas to the National Library and them purchasing the early portraits of Artists, I realised that Paul Joiner of the Art Department, had been to London to meet Josef and acquire for the Library  a significant number of drawings of Welsh interest. Shortly after I visited and photographed Josef at his home in Edith Grove, Chelsea which he shared with his wife Nini a respected Psychotherapist who’s practice was in the  adjoining house. They lived in a rather nice three storey house, designed for an artist, for if I remember it was here in Edith Grove where Ceri Richards lived. 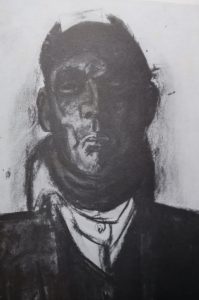 Through the front door to the back of the house, to a room with space for a day bed, steep stairs with rope banisters like the set of HMS Pinafore leading to his studio. At the bottom a trimphone, telephone directories, books and diaries. I sat Josef here and took the first photograph. It was a large and well lit studio, on the right a small kitchen with Belson sink and kettle, and in front of me a large easel with an iconic painting of a working man almost, robotic back- lit  against what must be the setting sun. You might say a scene from Ystradgynlais. Josef stood stoically in white artists coat, shirt and shoes. Every space of the wall was covered with African tribal art, masks and carved heads. The other main thing in the studio was a large, brown leather wing-backed armchair, We had been photographing for some time, so Josef, took a rest, and as I was setting up the camera I noticed his eyes close, the great artists was asleep. 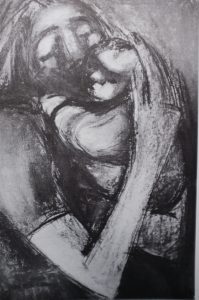 For me this was the picture, so content, and taken in black and white. We had coffee upstairs in the kitchen, surrounded still by his collection of tribal art, which is reflected in his own work.

The last picture of the day. 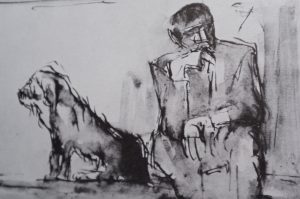 Kyffin Williams had his retrospective Exhibition at the at the National Library, he had mentioned that the Gregynog Gallery could do with a lick of paint, My exhibition of a hundred portraits of artists was to follow, your lucky he said,’’ you will have a nice newly painted gallery for your exhibition’’. The photograph of a sleeping Josef Herman was not going to be hung on the walls.

I had written an article for Planet, ‘ Artists in the Morning, Poets in the Afternoon’ ( Planet 128 Apri/May 1998) with the photograph of Josef sleeping across two page, so I opened the magazine and put it in a glass case that was in the centre of the gallery, and nothing was said. 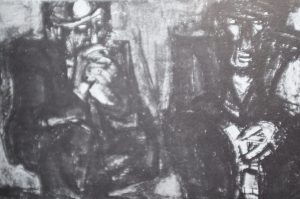 After his death Josef aged 89 in 2000, he left his library to the National Library and I was invited to the Library for lunch with Nini Herman and David their son.

In 2007 an exhibition and auction was held at the Ystradgynlais Miners Welfare Hall to raise funds for the Josef Herman Educational Foundation for School children of the area to study art. I exhibited a selection of the photographs I had taken of Josef. Nini bought three, one for herself and one each for her children for Christmas, these are the best photographs that have been taken of him, she said.