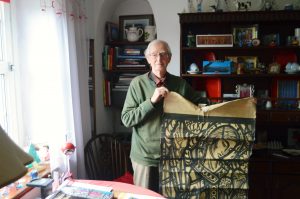 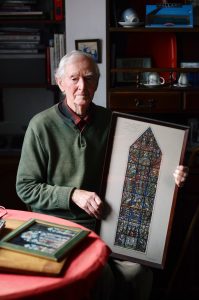 Like Howard Martin, Bryan Evans was from Morriston and  he often travelled to work with him. He also joined Celtic glass on Graduation from the School of Art in 1949.  After  Martin’s untimely death in 1972 Evans continued with the enthusiasm and encouragement he had from Howard Martin and became the Studios workhorse designer until his retirement in 1991. I visited him in 2019, at his home in Morriston, with some of his cartoons and designs.

These words are from: A Vision Fulfilled, The story of Celtic Studios. And Swansea’s architectural glass tradition. By Maurice Broady, Published by West Glamorgan Archives.