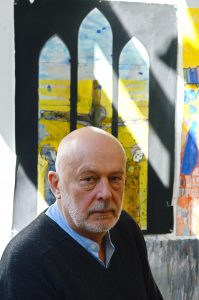 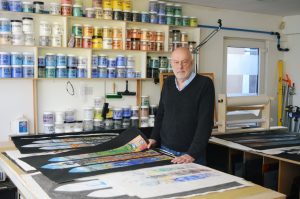 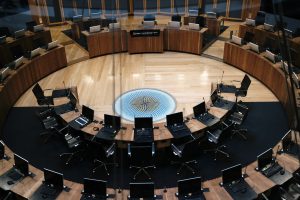 Alexander Beleschenko was born in 1951 in Corby, Northamptonshire of Ukranian parents.  He studied at Winchester, and Norwich schools of Art, The Slade and the Swansea School of Architectural Glass at the Swansea College of Art.  Alex is a prolific and internationally acclaimed artist. On his graduation in 1979 he worked part time at Celtic studios as well as teaching at the college. Initially he set up on his own studio in Exeter, but then returned to live and work in the Hafod.  Swansea had become the centre of  a new wave of creative contemporary artists, other graduates set up their own studios. Alex was at the hub of this movement with his work seen worldwide. One example here is the centre piece of the debating chamber at the Welsh Assembly Senedd building