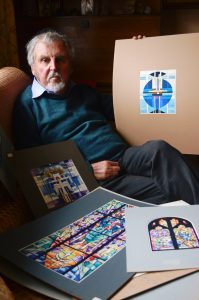 Howard Martin founded the Welsh School of Architectural Glass at the Swansea School of Art in 1935.In 1940 with his cousin Hubert Thomas he opened the Celtic Glass Studios in Prospect Place, Swansea, near the present Dylan Thomas Centre.

John Edwards, on graduation, joined the staff of Celtic Glass in the early 1950’s as a talented painter- designer. Typical of his early progressive designs was the Good Shepherd in modern dress at Bettws Chapel, Abergavenny in 1978. He moved forwards preferring his geometric style to the traditional Victorian figurative windows seen in most chapels and churches.