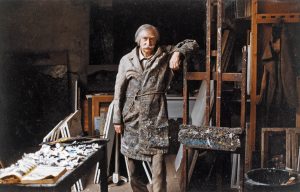 Kyffin Williams or how he became Sir Kyffin, was a friend and supporter of my idea to photograph the Artists and Writers of Wales, what has become now the Welsh Arts Archive. On our first meeting at his cottage at Pwllanogl near Llanfair P.G. he gave me a list of who I should see  and photograph  an idea that I still use today. As I have said before Will Roberts of Neath was the Best Painter in South Wales! Outside and around the back of the cottage was a brick shed, his studio, no picture on the easel, he told me the story of when his best friend Ivor Roberts Jones visited the studio, he would look at the work in progress on the easel and say ‘what is that’? Rummage through the stacked canvasses, pick one out and say, now that’s what you should be doing. Only Ivor could get away with that. 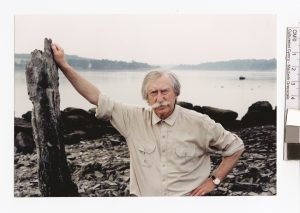 Opposite the studio was a small harbour with a building that what was once  where school slates were made, hence the beach in front of the  house made of shards of slate. 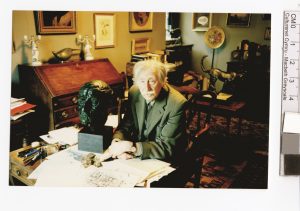 In the house, his writing desk had a bust of himself sent recently by Ivor Roberts Jones’s widow. It is said that Kyffin may have had a hand in Ivor getting the commission of Winston Churchills statue out side the Houses of Parliament, being President of the Royal Academy at the time.

It amused me that the illuminated Certificate hung in a golden frame in the loo.

He was such a generous man, gave me prints, and once showing me a Gregynog Press book of Gertrude Hermes wood engraving with six slipped in prints, said ‘pick one’ but that will spoil your set,’ take it’ He said! 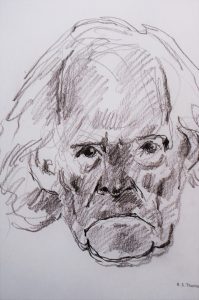 We exchanged Christmas cards and Kyffin often wrote in them, once having been asked by R.S. Thomas’s second wife to paint his portrait, something R.S. was never keen to do, but could not turn Kyffin or his wife down.’ How shall I do it’ Kyffin wrote, my answer was ‘Draw him quickly’, He invited me to photograph some paintings, I knew that was not true, as he would not ask me to do that.   So on arrival he put three pencil drawings on the floor, two with a colour wash and one just a plain pencil head, and that is what hung at his retrospective at the National Library in Aberystwyth. 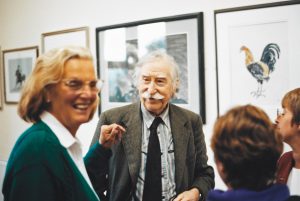 ‘Have you done an oil’ . Yes in the studio still on the easel, was a wispy white haired R.S. painted with a pallet knife with battle ship grey hair. What could I say? ‘Has his wife seen it’?,  Yes was his reply ‘she couldn’t stop laughing’ There are so many stories, I followed him, to the National Library, The Royal Cambrian Academy, and to his opening at the Albany Gallery timed for 7pm, and a queue. Martin Tinney had planned Peter Prendergast’s opening at 6.30pm. So there first and by the time that I got to the Albany all the pictures were sold except for one very large landscape in oil. 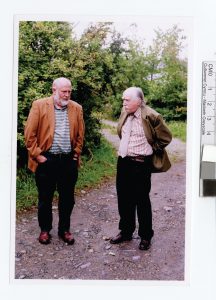 I stayed with Peter Prendergast over night, we had been taking photographs on the windswept cliff tops in driving wind. I told Peter that I was going to visit Kyffin in the morning,  Kyffin was not a well man, and I knew that this was the last time we would meet, Peter said, ‘Can I come? I think that they had been having a difference over artistic style, but I took their photograph together, the two Great Welsh Landscape painters. As we drove off up the unmade lane I looked in the mirror and there was Kyffin two arms in the air waving his last goodbye. The picture that I could not take! It was not long before I met Peter again at his exhibition at the Ceri Richards Gallery in Swansea before he to passed away.

So many stories, so many great artists, so many true friends, that make me feel that what I am doing is so important.