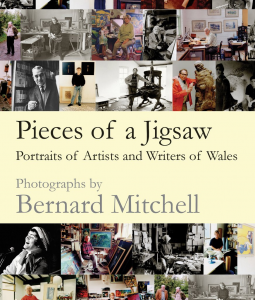 An unprecedented collection of photographic portraits of notable characters within the arts community in Wales, Pieces of a Jigsaw is based on Bernard Mitchell’s ongoing Welsh Arts Archive project. The project began in 1966 with a series of portraits of the Swansea friends of Dylan Thomas, including the artists Ceri Richards and Alfred Janes, the poet Vernon Watkins, and the composer Daniel Jones. The collection kept growing and now features many leading artists and writers who have significantly contributed to Welsh culture in the late twentieth century, including Will Roberts, Josef Herman, Max Boyce, Jan Morris, Ernest Zobole, Emyr Humphreys and Gwyneth Lewis.

Bernard Mitchell was born in Morriston, Swansea, in 1947. His interest in photography began at junior school with a cardboard pinhole camera. The present of a Kodak 127 and various cameras throughout school helped him develop his knowledge and interest in the fundamentals of photography. After leaving school, he studied photography at the Berkshire college of art Reading Before joining Thomson Regional Newspapers as an indentured photojournalist. Following a long career in newspapers, Bernard returned to Swansea in 2003 to study for a Masters degree in photography at Swansea Metropolitan University. In 2016 Bernard gifted his archive of photographs of artists and writers of Wales to the Richard Burton Archive at Swansea University.

Video: Bernard Mitchell’s – Pieces of a Jigsaw. Made by Film Students at the University of Solent

Published by PARTHIAN BOOKS, the book is available now:
Buy the Book – Pieces or a Jigsaw: Portraits of Artists and Writers of Wales