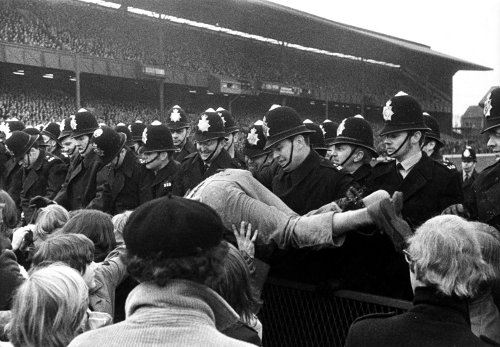 Looking back to the 1970’s, unlike today’s riots of looting and arson, it was a period of politically motivated demonstrations for a well defined cause. Anti-apartheid. Anti-Vietnam War, Ban the bomb, animal rights, and don’t forget the Irish problem. Violence was often the end result of what should have been a peaceful protest. I seemed to be always there; perhaps the picture desk was trying to give me a message? In February 1970, a mass of anti –apartheid protesters had managed to occupy the end stand at what was to become the last Springbok game in London at the time. Massed ranks of uniformed police tipped protesters trying to get onto the pitch back into the crowd, where plain clothed police made the situation worse, particularly for myself.