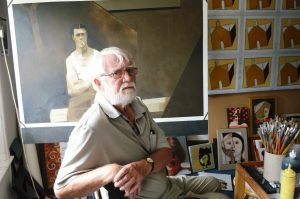 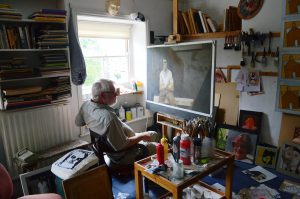 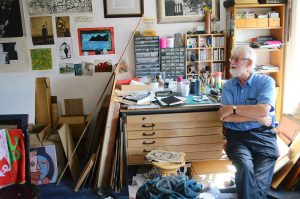 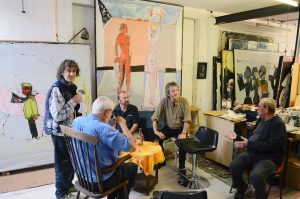 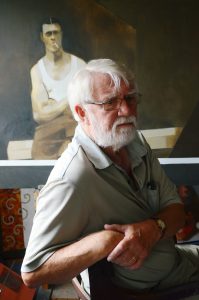 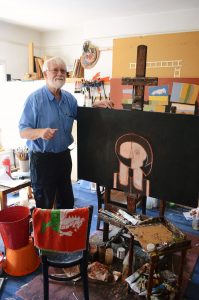 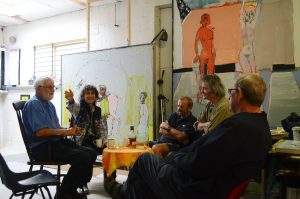 Emrys Parry is photographed in his Great Yarmouth studio and with fellow artists in the studio of Greek Cypriot John Kiki, at a weekly event over a glass of Scottish malt, where I was joined by my son Evan, who took the photograph. John Kiki lived for some time in Cardiff, where he has family were. So I will post an entry later.

Emrys Parry was born in 1941 and lived in Nefyn on the llyn, Peninsular, he went to Pwllheli Grammar school where he was inspired and influenced by the teacher of art Elis Gwyn Jones, he graduated from Leicester college of Art before leaving to teach in Norfolk.

I first discovered the work of Emrys Parry during a visit to the Plas Glyn y Weddw Gallery at Llanbedrog on the Llyn Peninular in North Wales, a series of beautifully crafted expressive landscapes drawn in charcoal. To my surprise I discovered after talking to the curator, that this most Welsh of Artists lived in Norfolk. On a subsequent visit to his studio in Great Yarmouth, it was manifest to me that Parry was one of Wales’s most gifted iconographic painters. It is perhaps his isolation in exile away from his beloved homeland that gives hid narrative pictures their power. They echo the longing of his historically suppressed language, culture and community with a patriotic desire for nationhood. These are not the icons degraded by commerce like the red dragon. Twisted and caricatured on travel brochures and T-shirts, Parry has created his own language of signs drawn from our Celtic inheritance. These thickly painted canvases transcend and evolve across the boundaries of Wales being equally effective in his adopted Norfolk home.

Many artists that I meet and photograph become friends, so the fact that my son lived in Great Yarmouth was a reason to visit Emrys. He often said how he would like his work to be better known in Wales, Sir Kyffin Williams had already put his name forward to become a member of the Royal Cambrian Academy. So I suggested that he send a couple of drawings to the National Library of Wales. The newly appointed National librarian Andrew Green, saw the drawings and asked if they had held an exhibition of the work of Emrys Parry. So Emrys had his one-man show in the beautiful Gregynog Gallery, The Library acquired some work, and a television programme followed on, and my friend had achieved his ambition