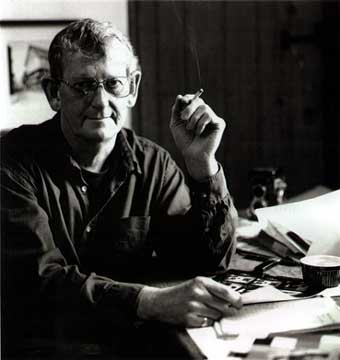 BERNARD MITCHELL – extract from his major exhibition at the National Library of Wales exhibition 1999.
by Peter Lord

This exhibition of portrait photographs by Bernard Mitchell is both retrospective and a report of work in progress. Mitchell’s project to record artists in their homes and studios started in 1966 but continues as new figures emerge – some young, some from the shadows of critical neglect – in the rich and diverse Welsh art world of today. The starting point was a final year project at Berkshire College of Art intended to document the circle of painters, writers and musicians who had associated with Dylan Thomas – the remarkable Swansea generation of Alfred Janes, Vernon Watkins and Daniel Jones. The experience of photographing Ceri Richards made a particularly deep impression on Mitchell but it was many years before the results could be exhibited or published. The indifferent reaction of the Glynn Vivian Gallery in Swansea to Mitchell’s offer of prints for the collection was enough to undermine the self-confidence of the young photographer, and the project was laid aside. By 1990, with Dylan Thomas approaching mythic status, curatorial attitudes had changed. Keith Bayliss, organising a festival of the work of Ceri Richards, was excited to learn of Mitchell’s early work and, appreciating the quality and intimacy of the images he was shown, published a number of them in the catalogue.

The publication revived Bernard Mitchell’s sense of the importance of his documentary project and also made him aware of the lost opportunities of the intervening quarter-century. He resumed work, firstly making contact with well-known figures such as Kyffin Williams and Will Roberts. Through them Mitchell found his way into the extensive network of personal relationships which forms the fabric of the art world. The death of John Petts shortly after the painter had been photographed by Mitchell reinforced his sense of urgency – but also his awareness of the size of the task and the need for sponsorship. Eventually, the necessary support was given by the National Library of Wales (for a limited period) initially through the purchase of prints in 1996. The Library’s support was acknowledged by the photographer in the following year with the gift of the negatives of the original ‘Friends of Dylan’ series, from which 160 high-quality prints were made for the collection. Mitchell then gave up his work as a press photographer in order to devote himself to the project.

For a comparable observation of intellectual life in Wales we must go back over a century to the work of John Thomas – though Thomas’s tradition of studio portraiture was very different from that of Mitchell, who sees his work as belonging to the documentary tradition of Cartier Bresson. He is an editor rather than a director, and he may return on several occasions to a house or studio, taking time to talk and so observe how the sitter relates to his or her surrounding space.

Mitchell believes that it is by relating the internal to the external that an image best expresses the essence of a person. The portraits operate at two levels. Mitchell’s observation of individual; artists, writers and musicians is at the same time an exploration of the proximities and distances between them. Each portrait is a self-contained art work, but when taken together the images amount to more than the sum of their parts. Mitchell sees them as pieces in a jigsaw which, seen as a whole, presents a portrait of the Welsh art world of the last decade of the twentieth century.